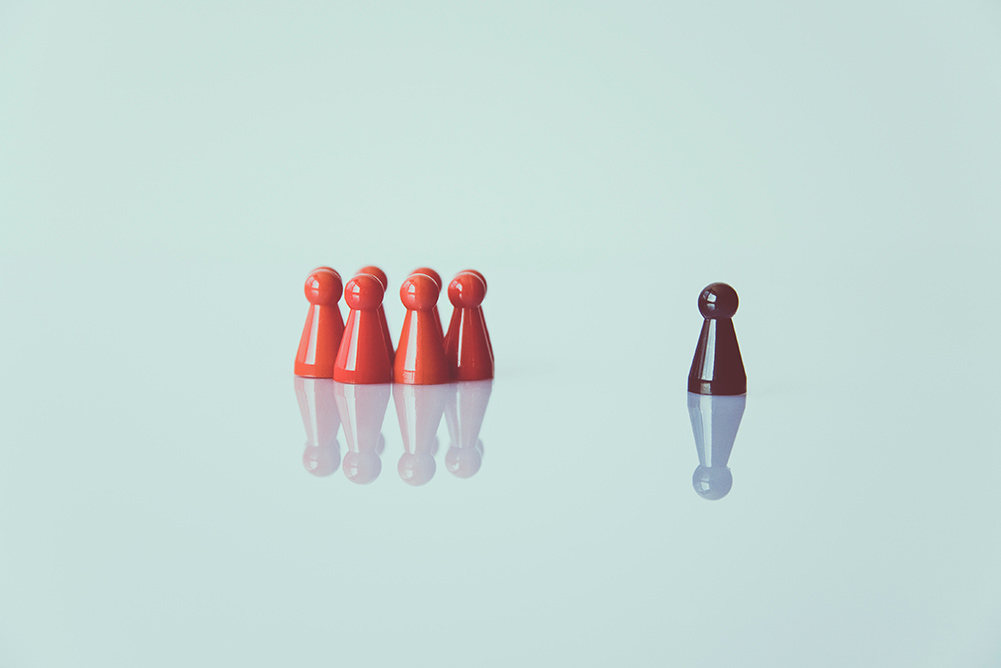 We tend to look at the great societal challenges we face in isolated, fragmented terms.  Racism, homophobia, religious intolerance, sexism, inequality, organized crime, nationalism – individual fights and movements are underway in courageous attempts to make the world a better place, but they are issues that are often seen as distinct, separate in their identity, as if they had nothing in common.

We do not question when the plight of each scapegoated group is spoken of in totally isolated terms.  Racism is hardly ever spoken of in the same breath, for example, as misogyny.  Religious persecution is never mentioned arm in arm with the neglected or abused child.  Corporate malfeasance such as the Dow Chemical disaster or the VW diesel emissions scandal seem on the surface to be totally unrelated to playground bullying or the secretive world of cults.

Is it true to assume that issues involving groups are entirely distinct?  As a society, we think (or assume) so.  If this is correct, of course we should treat them separately.  However, what if there is an underlying structure that time and again pulls the marionette strings of destruction?

One theory in particular should give us pause for consideration: “Group Narcissism”, a term used by Erich Fromm (The Heart of Man, 1964).  These days, it is often said that we live in a narcissistic age, that the problem is an “epidemic” – yet before the language of narcissism emerged from psychology into the mainstream, it was normal to treat each individual separately.  We might have said, for example, that so-and-so was selfish or “full of himself”.  Without the language to connect these individuals, it appeared that each problematic one existed as an isolate.  It was only when we had the language that connections could be made.

The concept of group narcissism is therefore a radical one.  It is a way of speaking about the forces that underlie many of the world’s most destructive institutions and events.

What is group narcissism?

One of the possible reasons that we don’t talk enough about the narcissism of groups is the ubiquity of the problem.  This is not a problem unique to cults.  Everywhere we look, there are groups behaving narcissistically, even murderously.

The “classic” example of a Narcissistic Group is that of Nazi Germany.  In typical narcissistic behaviour, the group “self” was seen as perfect and strong (blonde, Aryan, hard-working etc).  “Weakness” or “badness” was denied and projected onto minorities.  Scapegoats were found both within and outside Nazi Germany.  The same deeply narcissistic traits occur wherever there is genocide, whenever there is scapegoating, whenever “the other” is to blame, and fault with the group-self not adequately acknowledged.  I use Nazi Germany as an example but there are, unfortunately, plenty of examples in today’s world.

From the smallest scale of the family, through to the macro scale of countries, we find some groups far more prone to group narcissism than others.  Gangs and mafia organizations are typically highly prone.  It is not difficult to find countries that are deeply narcissistic, and others that are not, along with all the attendant consequences.

The defiance of Rome forms a theme central to Christianity.  Every Empire will face questions over whether it is secure enough to allow dissent and alternative thoughts and ideas.  A narcissistic structure cannot abide this at all: it needs one will, not many – a trap which of course, the church has also fallen into time and again (burning of witches, crusades and persecution).  Any organization can become narcissistic, and some (like the Catholic Church) have been through periods with varying levels of narcissism.  At times the group narcissism has been extreme, at others, much less so.

It is rare to read an article in our mainstream media, where problematic areas of society, such as racism and sexism (let alone the others on this list) are considered together, at least in part as connected problems.  Yet, scapegoats abound in these ‘isms’, “in-groups” are favoured, insecurities masquerade as strengths and voices are cruelly silenced.

Bullying exists wherever there’s a narcissistic group.  Projection and putting down others in an effort to gain an egotistic sense of importance (and to mask insecurities) are familiar territory for peer-to-peer bullying in schools, offices and elsewhere.  As with all narcissistic groups, kindness, empathy and curiosity are sacrificed on the altar of Self.

The difficulty in approaching the topic of Group Narcissism is not that the phenomenon is hard to identify.  Quite the reverse: the existence of narcissistic groups, their insecurities, and the devastated worlds they leave in their wake are evident in every direction we look.  The examples above necessarily represent only a fraction.

It is a strange anomaly that, working in the field of psychotherapy, we take the existence of the topic of narcissism for granted.  We do not speak of people solely in terms of the individual problems they exhibit.  Rather, over the years, we have developed a language to speak about people and the problems they have in common.   The same is true, for example, in the field of medicine, whereby a rash would never be treated in isolation, as if unrelated to millions of other rashes.  The very idea is ludicrous.   Why then do we not apply the same logic to groups?

The “narcissism” of individuals has grown out of psychology to become a mainstream topic for discussion.  The word has entered the lexicon of society in order to be able to talk about human beings in an everyday, modern context.  For some reason, we have not as yet begun to talk about group behaviour in the same way, despite the warnings of history, stark and undeniable evidence, and the sad news of every day.  Instead, we as human beings make our stands divided, fighting pitched battles against forces of discrimination and destruction while the same dynamic operates ad infinitum.

If narcissism is in part a failure to truly relate, it would seem helpful to extricate ourselves from our silos of identity and approach something that is a shared problem, rather than a collection of unrelated ones.

*including the “negative narcissist”, someone who is still consumed by Self, but in a depressed, nihilistic way.

Jung, Freud, Kohut and Fromm have all informed & influenced this article.